Kent Schools Tour – Helping to Get the Anti-Bullying Message Across

It’s a sad fact that at least one in 20 students have, at some time, been the victim of bullying at school. This figure could be much higher as not everyone admits to being bullied because they may not realise that the constant ‘banter’ about their appearance is bullying.

It’s not just physical intimidation or words designed to hurt that is defined as bullying. Today, the digital era has ushered in a new kind of torment in the shape of cyberbullying which includes everything from hurtful comments online to photos and videos being shared without someone’s consent.

The effects of being bullied stay with someone for a long time to come. One-off bullying incidents can dent someone’s self-esteem and confidence. Long term bullying can affect everything from how relationships are made to someone having a distorted version of who they are.

Bullying can be defined as to seek to harm, intimidate or coerce someone who is perceived as vulnerable and yet many people who have or do suffer at the hands of a bully wouldn’t say they are vulnerable but they are once the bullying takes effect.

It’s when a joke goes too far, when banter turns personal, relentless and hurtful, when the pushing and the shoving stop being funny, when someone carries on doing something to you even when you have asked them to stop.

What’s being done about bullying in school? 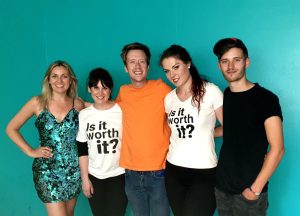 The majority of schools in the UK take incidents of bullying seriously and will endeavour to stop bullying before it starts. They do by creating an environment in which everyone, their differences and diversity are celebrated and welcomed, and where tolerance is encouraged.

As well as creating a positive environment for all students, many schools also look to equip students with skills that help them deflect bullying by either reporting it or stepping in to stop it.

For those affected by bullying, there is a lot of help and support available in school but also organisations too such as Young Minds, Childline and the National Bullying Helpline. But sometimes, reaching out is the hardest thing to do when you feel the world is against you.

We were proud to be part of a local initiative across Kent schools to raise awareness of bullying. This tour visited primary and secondary schools in the area, delivering important messages on how to stop bullying and how to support those who had or are at the receiving end of bullying, including online and on social media.

It’s not the first time this tour has taken a serious message to school students in Kent. The tour had been a success the previous year and so to continue to deliver the powerful message, the tour hit the road again this year.

This kind of work is all about engagement. Talking with students, listening to what they have to say about bullying and getting feedback on just how endemic the problem is. It is also about understanding what works when it comes to challenging this kind of behaviour too.

Of course, bullying won’t be thwarted with just one tour or roadshow. We need to maintain a national conversation about bullying with the team at We’ve Got Talent proud to play a part.